Sea turtle populations have been depleted from historical levels due to human pressures including harvest and exploitation, fisheries by-catch, and habitat declines. Modern conservation efforts have done much to address these threats, but now a new suite of challenges associated with global environmental change are on the rise. In my research program with the Jumby Bay Hawksbill Project in Antigua, I study a various aspects of environmental change and how they impact hawksbill sea turtle ecology. 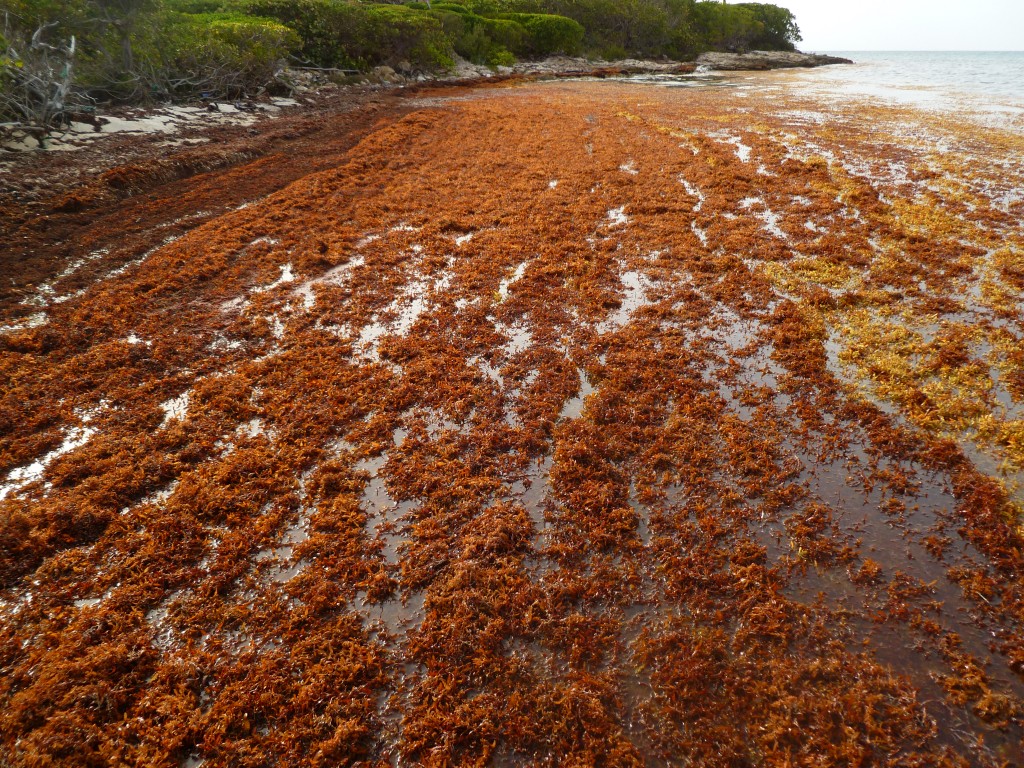 Global change has featured an increase in algae blooms. Throughout the Caribbean, Sargassum macroalgae has been proliferating in unprecedented quantities and collecting in coastal nesting areas. The above picture illustrates the conditions at our study site on Long Island, Antigua for much of the 2015 nesting season. Macroalgae accumulation has ramifications for both nesting adults and emerging hatchlings. We are involved in a project aimed to describe the effects of Sargassum in Antigua, and our efforts kicked off with a short paper published as a natural history note in Frontiers in Ecology and the Environment. We continue this work with more rigorous original research, and published some preliminary results in a conference paper.

Atmospheric temperatures have been rising at a rapid rate. This has major implications for sea turtles that exhibit temperature-dependent sex determination (TSD), where warmer temperatures lead to the production of more female hatchlings. High temperatures can also reduce survival of incubating embryos. Understanding how these thermal effects on offspring will translate to effects on population dynamics is complex, and we wrote a review on these subjects that was published in BioScience in 2021 (the first chapter of my dissertation). 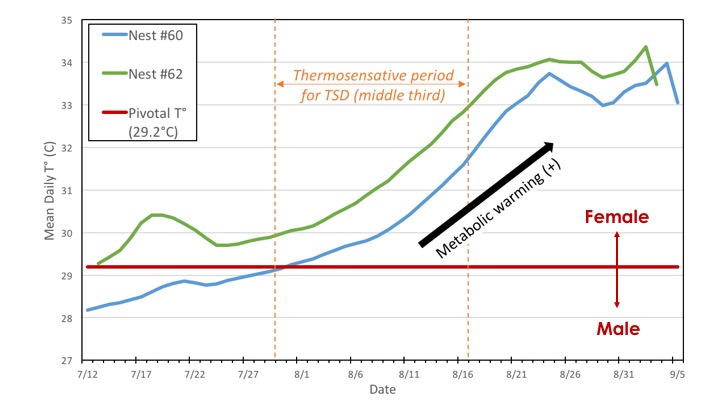 We are also studying incubation temperatures in the field to understand effects of rising temperatures on the Antiguan hawksbill population. The above graphic shows temperatures in two nests (green and blue lines) monitored with data loggers in 2015. We can examine where temperatures were during the thermosensitive period for TSD (when sex is determined) and how this compares to the pivotal temperature that creates a 50/50 sex ratio. (Note that this ratio tapers in either direction from this pivotal temperature and does not become 100% female immediately). As mentioned, beyond affecting sex ratios, extreme temperatures can lead to egg and hatchling mortality, so we document nest hatching success for these nests as well. My PhD research asks: What environmental factors combine with atmospheric and sand temperatures to ultimately dictate hawksbill egg incubation temperatures, and how does this inform our understanding of climate change’s impacts on sea turtles?

Another feature of the environmental change occurring globally is an increase in species invasions. At our study beach on Long Island, Antigua, an invasive beach plant (Scaevola taccada, pictured left) has become the dominant species of vegetation and differs significantly from the previous dominant native plant, seagrape (right). We are in the midst of a project that seeks to describe how hawksbills are interacting with this invasive plant and the resulting impacts on nesting ecology. 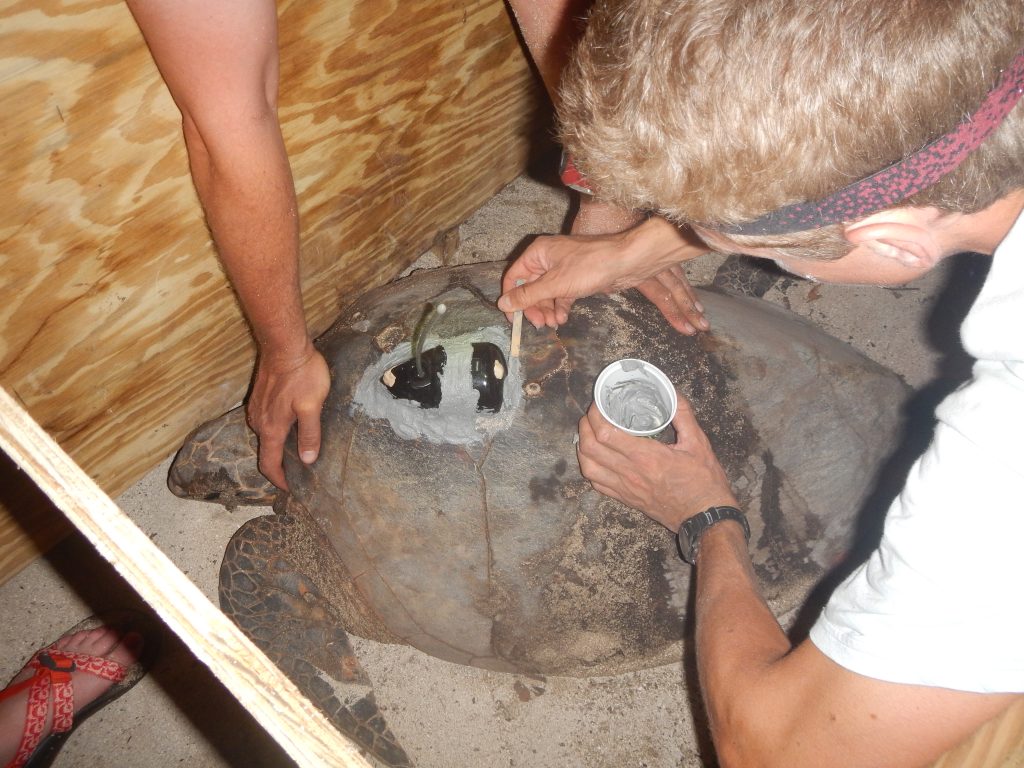 Environmental change is playing out in all sea turtle habitats, not just nesting beaches. The first step toward understanding changes in key marine habitats is to determine where turtles migrate to, and we do this using satellite transmitters. In the above picture I am using epoxy to attach a transmitter to a hawksbill with the help of the Jumby Bay Hawksbill Project field team in 2016. See this migration map for an example of the migratory movements of one of our turtles.

In the Florida Keys, various endemic mammals are threatened by pressures from global environmental change. Dr. Dr. Michael Cove conducts research in this system to aid the conservation of endangered small mammals, focusing on the Key Largo Woodrat, Key Largo Cotton Mouse, Lower Keys Marsh Rabbit, and Florida Key Deer. To date, we have collaborated to publish four papers from our work in the Keys (see Mike’s Google Scholar page for additional publications). One publication is a field note on the range of a familiar reptile, a second paper in Restoration Ecology evaluates Key Largo Woodrat habitat restoration, a third publication documents an interesting mammal interaction, and the final paper is an “EcoPic” article in Frontiers in Ecology and the Environment that poses questions about woodrat “stick stacking” behavior. 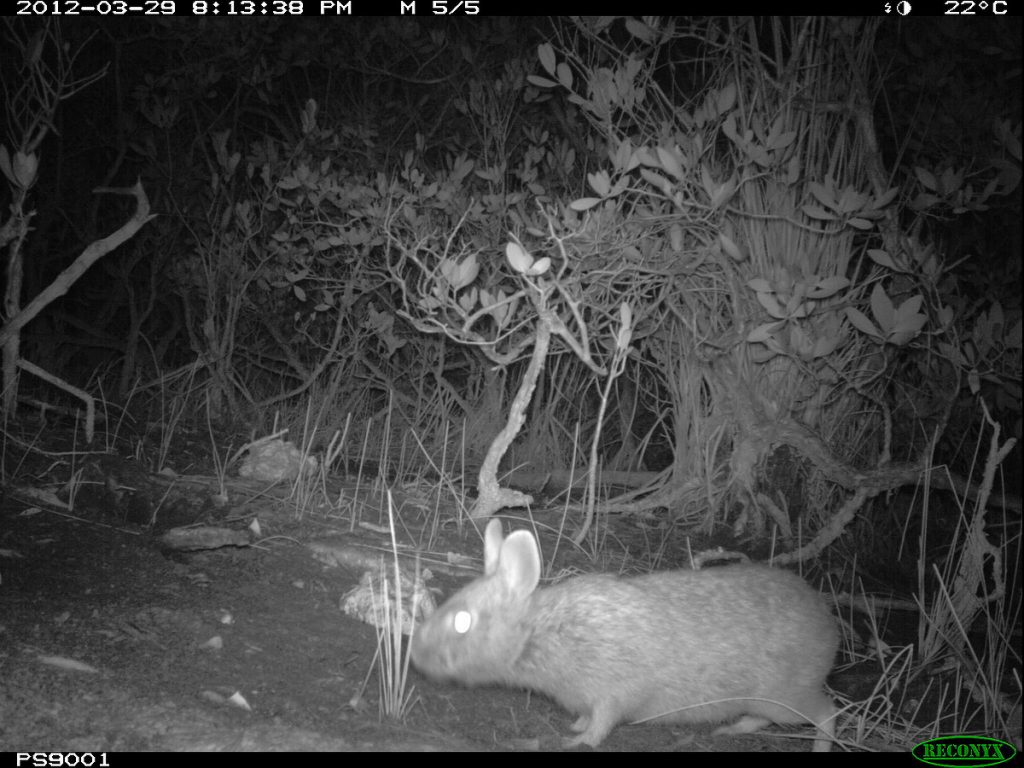 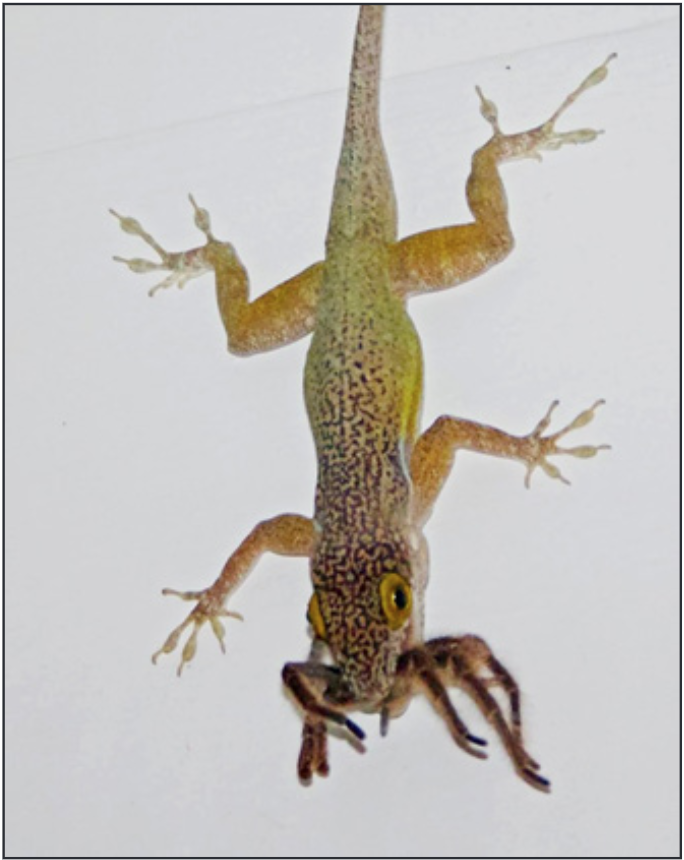 The Caribbean is host to an impressive example of adaptive radiation. Lizards in the genus Anolis inhabit islands throughout the region and have adapted to their local environments, resulting various cases of phenotypic divergence (i.e., developing different traits in different environments) and speciation.

In Antigua, we have two anole species: Watts’ anole and Leach’s anole. During our nocturnal sea turtle nesting surveys we were surprised to observe these typically diurnal (active during the day) lizards out and about, making the most of nocturnal foraging opportunities. We documented nocturnal anole behaviors and published results in a paper in Herpetological Conservation and Biology. This paper was made possible through collaboration with Dr. Chris Thawley, Alex Fireman, Dr. Sean Giery, and Dr. James Stroud. James and I also published a short note documenting nocturnal behavior in the Watts’ anole for the first time.

The gene is increasingly becoming the fundamental unit of ecology. This is especially true for sea turtle ecology, where DNA preserves demographic patterns that would otherwise be unobservable and unknown because of the highly migratory and cryptic nature of sea turtle life histories. 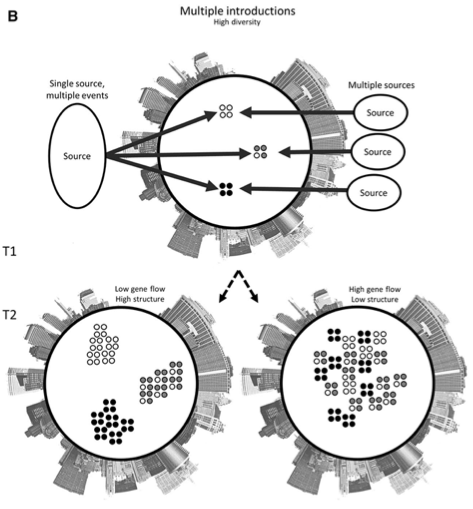 In recognition of this reality, I have focused much of my coursework and collaboration on conservation genetics. The best example of this came in 2020, when I coauthored a paper in Oecologia titled “Gridlock and beltways: the genetic context of urban invasions.” The paper was spearheaded by first author Emily Reed, an urban landscape genomicist in the Burford Reiskind Lab, with two other coauthors: Dr. Megan Serr and Dr. Martha Burford Reiskind. Part of Figure 1 from our review is shown here, but I encourage you to read it for yourself!